The Game Break Down.

A fleet of 10 spaceships, the remains of the human civilization, try to repel Wolf attacks and flee the main Wolf force by series of FTL /Faster Than Light/ jumps. The 10 ships are divided into 8 fractions with their own special goals, in addition to the common goal of survival, making this a semi co-op.

Each Fraction has a specialization in resource production or service, thus is neither team self-sufficient. The game merges typical board game mechanics like resource production, management, and tactical fleet combat, with an open floor semi co-op unregulated resource negotiation market.

The market was affected by bleed from political role playing based on historical grudges, nationalism, and opportunism - combined with a constant paranoia caused by an announced traitor mechanic. There are traitors Among Us, but how many, and who?

These two layers has a negative effect on the communication between players and fractions. Entering negotiations with suspicion and bias adds much noise and chaos into the system of resource exchange. Timed rounds add another layer of stress, adding even more noise to communication.

Having played DoW once before, thou only as the media, I had some knowledge of what to expect. One of the main challenges of my first game was keeping track and score of all the fractions, their vessels, and their function in the fleet. Constantly having to refer to the Background Guide (digital or print out) is time consuming, so I summarized the information on the ships in 10 reference cards.

I made 3 sleeved decks. The intention was one face up deck on our table for deduction - and one deck for commanding my crew mates: “Talk to these two ships about fuel and water” or “Talk to this ship about engineers”. The last deck would be mine, for when greeting other players - and reminding me of what their fleet function was.

Note that the space ship silhouettes are borrowed from search engine results.

The day was set up for an experiment with a chaotic by design system to run to an end point, only slightly nudged by scripted events and moderation. I was joining with my brother and sister on a 5 piece team with two players we didn’t know from earlier. I had been assigned the role as Admiral of the ICSS Aegis, the only military ship in the convoy.

From the start we were constantly low on resources. Early game market conditions where terrible, and everyone came to the ICSS Aegis for handouts, like we had anything to spare other than lending out shuttles. Around the start of the second round, I was slipped a note stating I was a Wolf and instructions for how to play. I decided to not play my hand right away and went for a slow conservative strategy.

Bad luck on the Jump Card draws, and our failure in securing fuel to draw more, led to a long delay before we could make a fleet jump. When the first jump coordinate communication failed, this led to massive suspicion towards the ICSS Aegis, and me as Admiral. The outcome of these events was not entirely my fault, but I could sense eyes in the room on me. 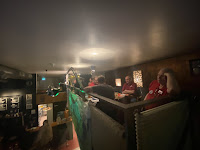 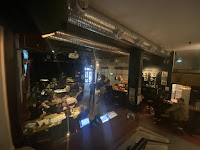 After the first rounds of terrible board game results and communication blunders, the fleets suspicion became politicized and the Admiral was summoned to the Intergalactic Council for interrogation. I barely escaped imprisonment but was assigned two observers from two different fraction for the next round. I managed to convince the observers I was innocent in the claims, and the observers in their turn convinced the council to let me continue my duty.

The political farce lasted for some 3 rounds, and during this time I had completely lost control of the status of the board game and ship status. The Wolf attacks where massive, the fighter squadrons where dwindling and at about mid-game the ICSS Aegis had more damaged systems than functioning.

Especially the interrogations at the council gave me a lot of adrenaline and talking myself out of that mess was one of the more satisfying experiences for me personally. It felt as a hairy situation, and for the duration of this process I was constantly worried I would be eliminated from the game and given a new role.

I had really hoped to play the deduction game as a loyal role, trying to weed out the traitors. So, I whole heartedly contributed to that game with the help of my crew mates. On the ICSS Aegis we actively used the Ship Reference Card during Team Time when discussing the loyalty and suspicion towards the different ships and fractions. The cards were also used to keep track of which ships had jumped to different locations. Towards the end of the game, when the fleet became more and more fractured, I think the ICSS Aegis crew for some minutes had better information on the where each ship in the fleet was than Control.

Their mid-game negotiations and communications efforts where really good and they slowly curated bonds to a few key vessels that proved themself thrust worthy and cooperative. At this point the crew of the ICSS Aegis hatched a plan. We would give the coordinates for the next jump to our two trusted allies and then just make the jump. This would pressurethem to follow, as the alternative is sitting duck mid-space, with no military defense.

At game end the fleet was split in three groups, at least two of them containing a wolf or more. The ICSS Aegis (military, food and water production capacities), The Icebreaker (ore mining), Refinery 124 (fuel production) and the Endeavour (science) ended up at the same jump coordinates. These ships had everything they need to keep the fleet self-sufficient. In the brig of ICSS Aegis an exposed Wolf traitor, all other players loyal.

Well, except or me, an unexposed Wolf traitor at the helm of this operation.

The crews of the 4 ships ending up at the same jump location as I played an excellent game. Towards the end of the game, they learned to thrust each other, the resources distribution became functional, and I am so proud of the ICSS Aegis Logistics and Communications officers ability to coordinate the last few jumps. 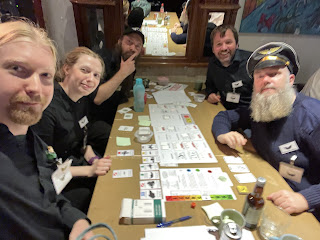 The event ended with a debrief where the traitors where revealed. We had to do a walk of shame up to the stage to say a few words. Then the representatives from the different ships also shared some thoughts on the game from stage. I played the traitor roll as best as I could, and smirkily quoted (what I at the moment thought was Sun Tsu, but when search engining it turned out to be Napoleon); "Never interrupt your enemy when he is making a mistake." The end.

Or… Could I (in my heart) have played a loyal double agent - securing the minimum necessities for humankind to survive and helping to escape the Wolves - giving humanity a chance to resettle?

But at the event debrief I chose to stay loyal to my written role description and had successfully contributed to splitting the human fleet in at least 3 - thus securing that the basic and critical infrastructure needed by humanity to survive was under my control at the end of the game.

Side note. Another, more theatrical story arch (in the Admiral double agent- time continuum) could be the Admiral publicly executing the Wolf prisoner and then dramatically put the gun to his own head stating “I am compromised, the rest of you are loyal. Humanity, now prosper!” Bang. Brains Splatter. And Scene.

Now that would have been an ending.

On time, with good moderation, at an excellent venue. 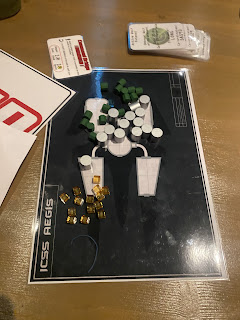