The Joy of getting Sidetracked. An update.

These last 8 years I have put a lot of work into my «World Building / Game Project». This has led to me constantly getting «reminded» by people that I am still far from «anything even close to what could be called a result». And I have to agree that in the dominant world view «results» equals a «sellable product», but dont worry, this blog entry is not going to be a «no one understands my art» rant!

The last months I have allowed myself to get a little side tracked from all the «World Building», and rather played around with some other, more silly, ideas of mine: Funny Animals playing Golf.

Just to be clear: I have never in my life held a golf club, and I couldn´t care less for sports, but ever since I saw the Table Top episode where they played «Formula D» i have had the strange urge to make a board game about golf. 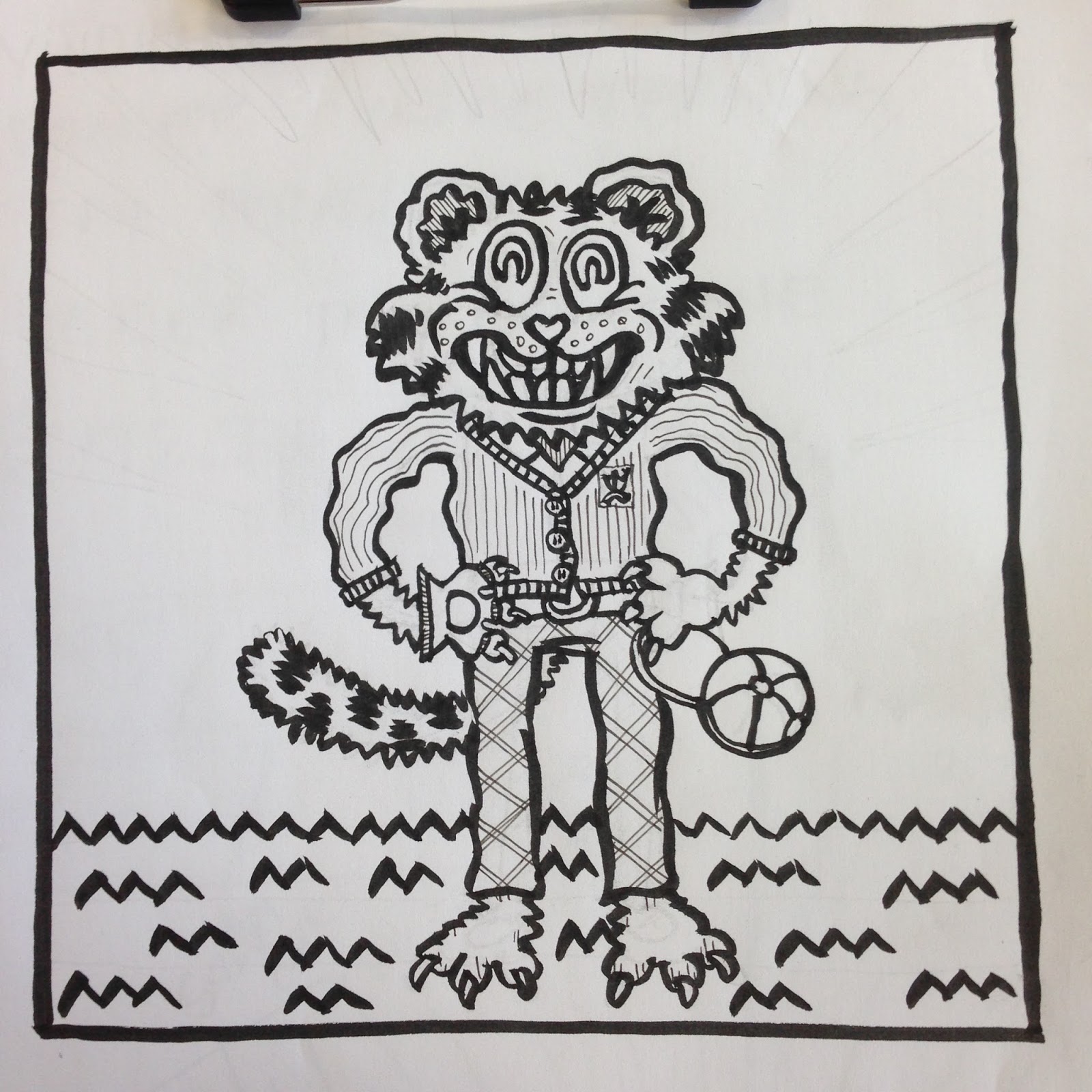 When I attendet the Board Game Workshop at my local gaming convention Arcon 30 (20-23 june 2014 in Oslo) i pitched this idea to the other participants of the workshop. The idea catched on in the group, and I got a lot of feedback right away. During the first day of the event I made a draft of the core mechanics, wich was revised and rewritten several times before «setteling». When writing the rules it also became clear that this was not going to be a realistic «golf simulator» but something much more «silly». As a cartoonist I cant help but to have a love/hate relationship to «funny animals», and as soon as the thought popped into my head I could not stop thinking about it. The theme fit the «crazy physics of the rules» like hand in glove. 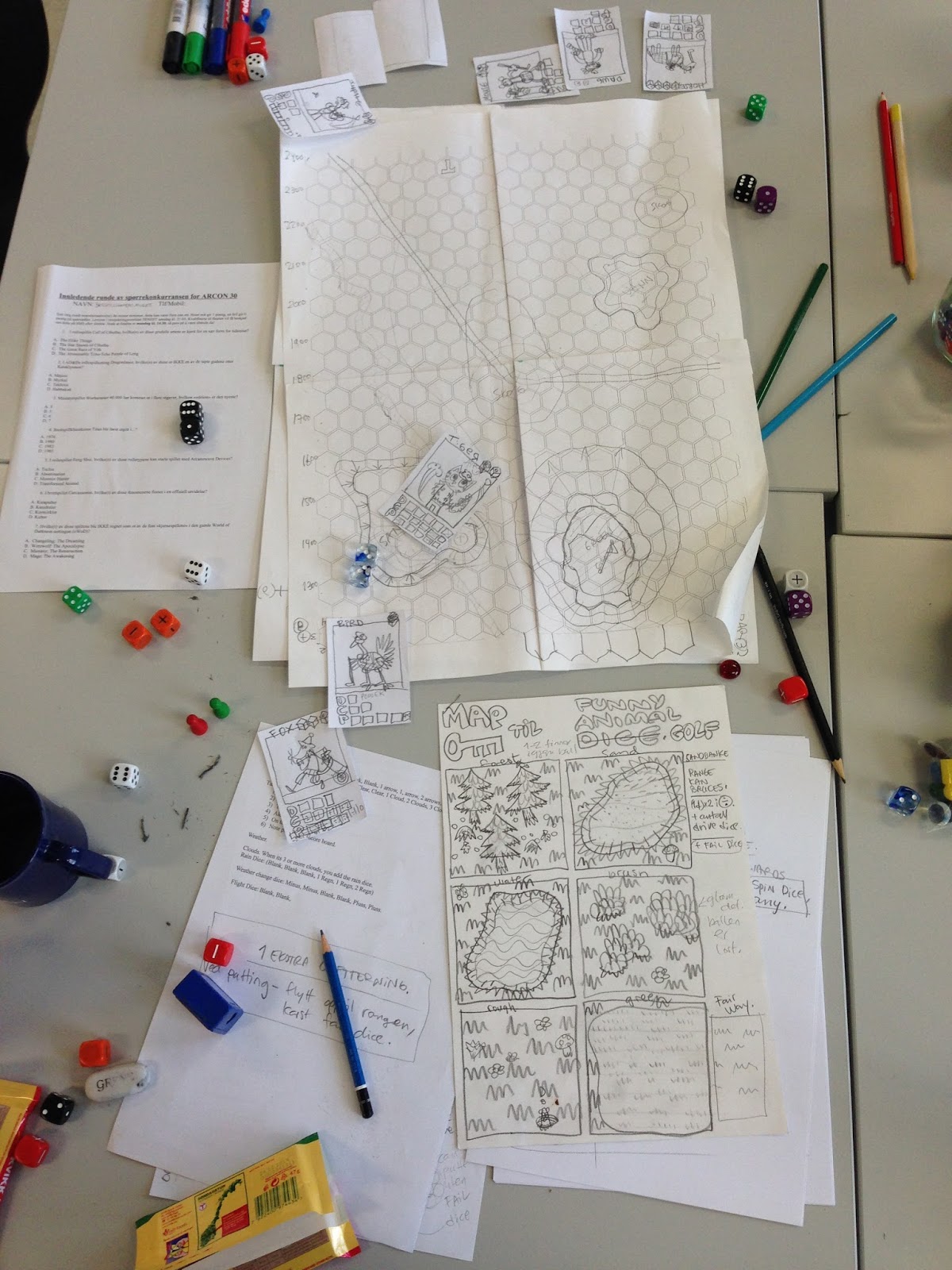 The second day of the event I brought some empty hex grids, and made a sketch of Hole 1 so we could play test the core mechanics. The game played fast, and pretty smooth right away, and even if many changes where applied to the rules during this first day of alpha testing, the core mechanics stayed the same. One of the important things we noted down during this session was the order of resolving the dice after rolling the Pool. Also the importance of having a “ball token” and not move the character token right away became apparent. A few of the play testers where really enthusiastic about the game, and helped design hole 2 and 3. They even gave me some great mechanics for elevation lines, terrain and hazards. The cooperative sketching of Holes was a really pleasant experience, and I wanted to do more of that. 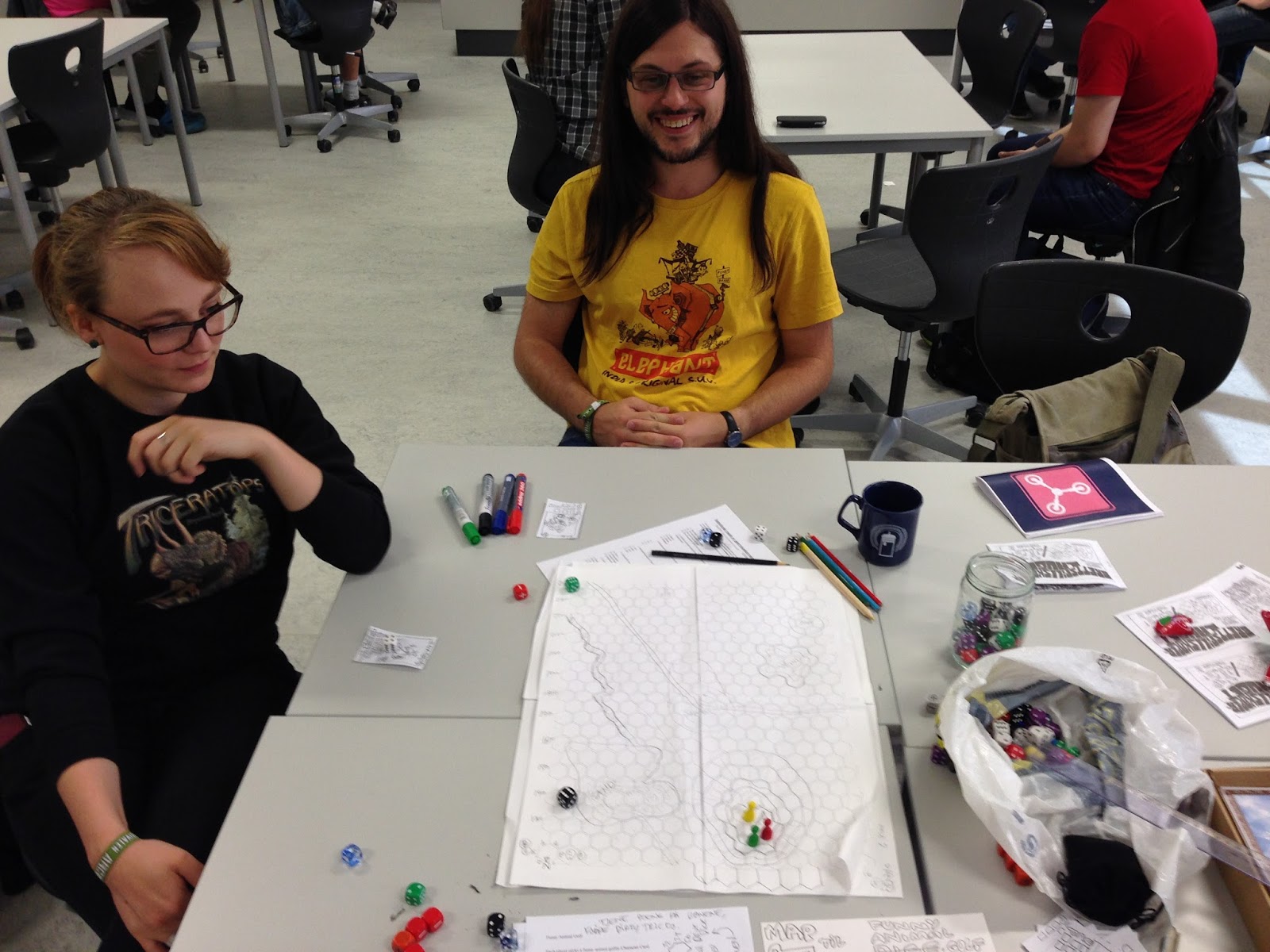 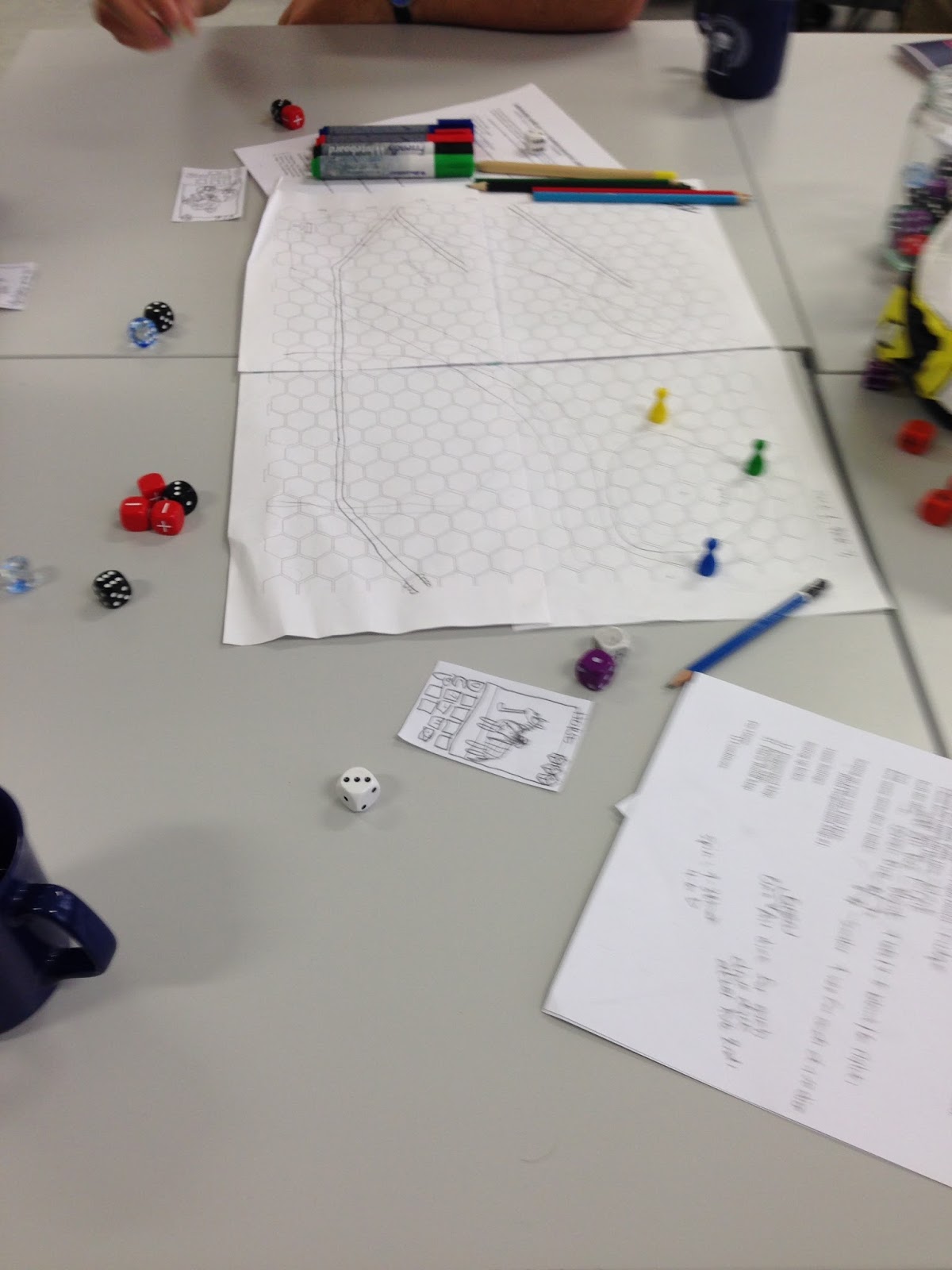 After a few weeks of sumer vacation I returned to Oslo, eager to get started on the illustrations for the game. After drawing «12 characters» and some «holes» I also rewrote the rules and made a game prototype for the next round of playtesting and «blind» testing. Having the prototype in my hands felt really refreshing, and after so many years «in the process of making something huge» it felt so good to actually have «finished» something. This was something people could «understand» - it was easy, fun and quite streamlined – and as many put it «something that could sell»... a product. 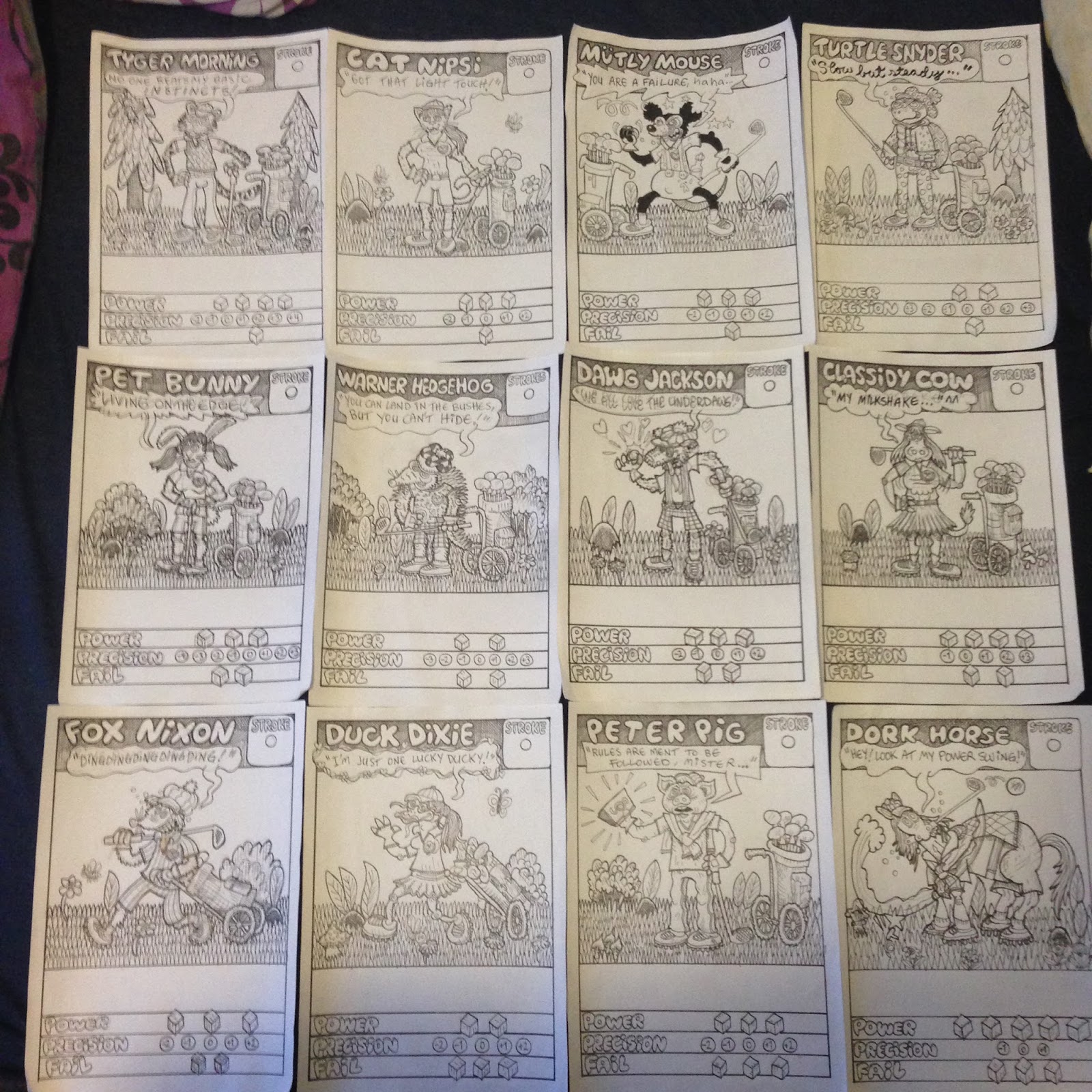 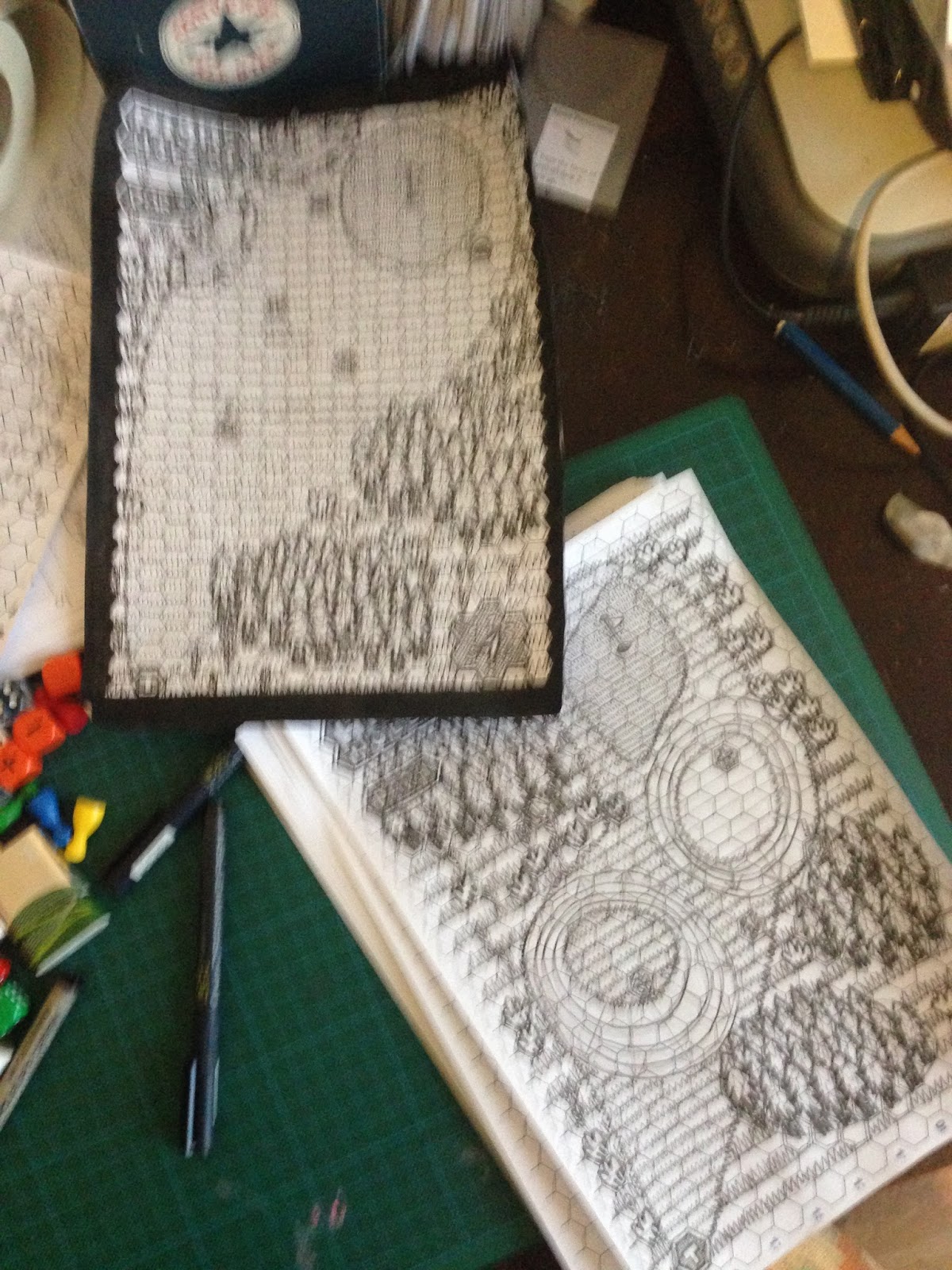 When I attended Regncon (Regncorp 2014, 3. - 5. October 2014, Bergen) I was lucky enough to get a group of mixed experienced gamer to «blind» test the rules. To my exitement they managed to play the game, more or less, and I recieved some cruical feedback. During the convention I got to demo the game for many random people attending the convention, and as my earlier experiences had shown me, some really liked the game – and wanted to help me design more holes. At the convention I managed to complete a whole course; «The Elephant 9».

When talking to people at Regncon about the game, someone jokingly remarked that I should make a «golf cart racing game» in stead – wich would be «so much more cool». I just loved that idea, but my mind some how blocked out the «in stead» part ... This was just perfect! With just a few modifications to the lay out of the maps I could design them with both games in mind – and why wouldn´t I? 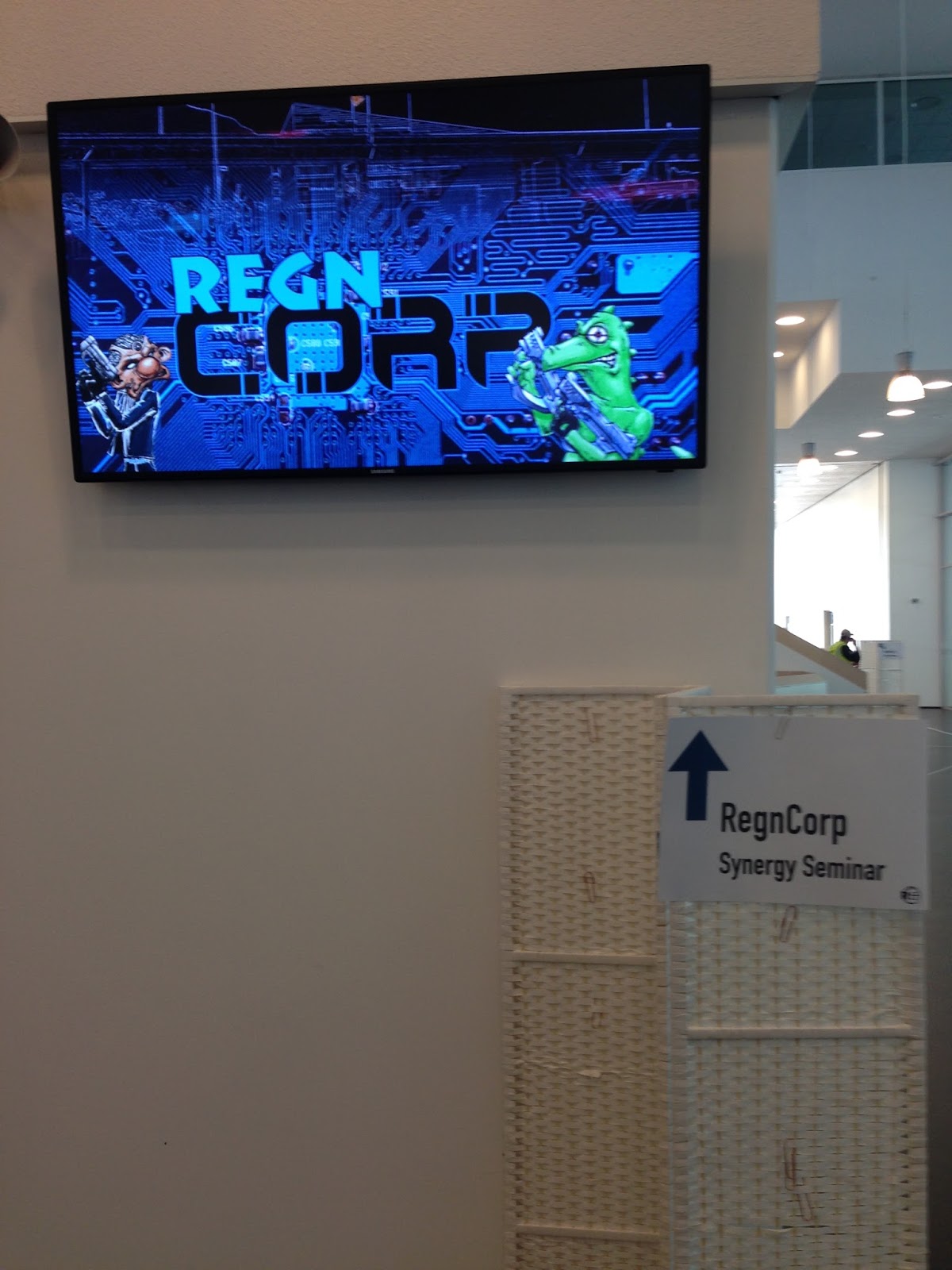 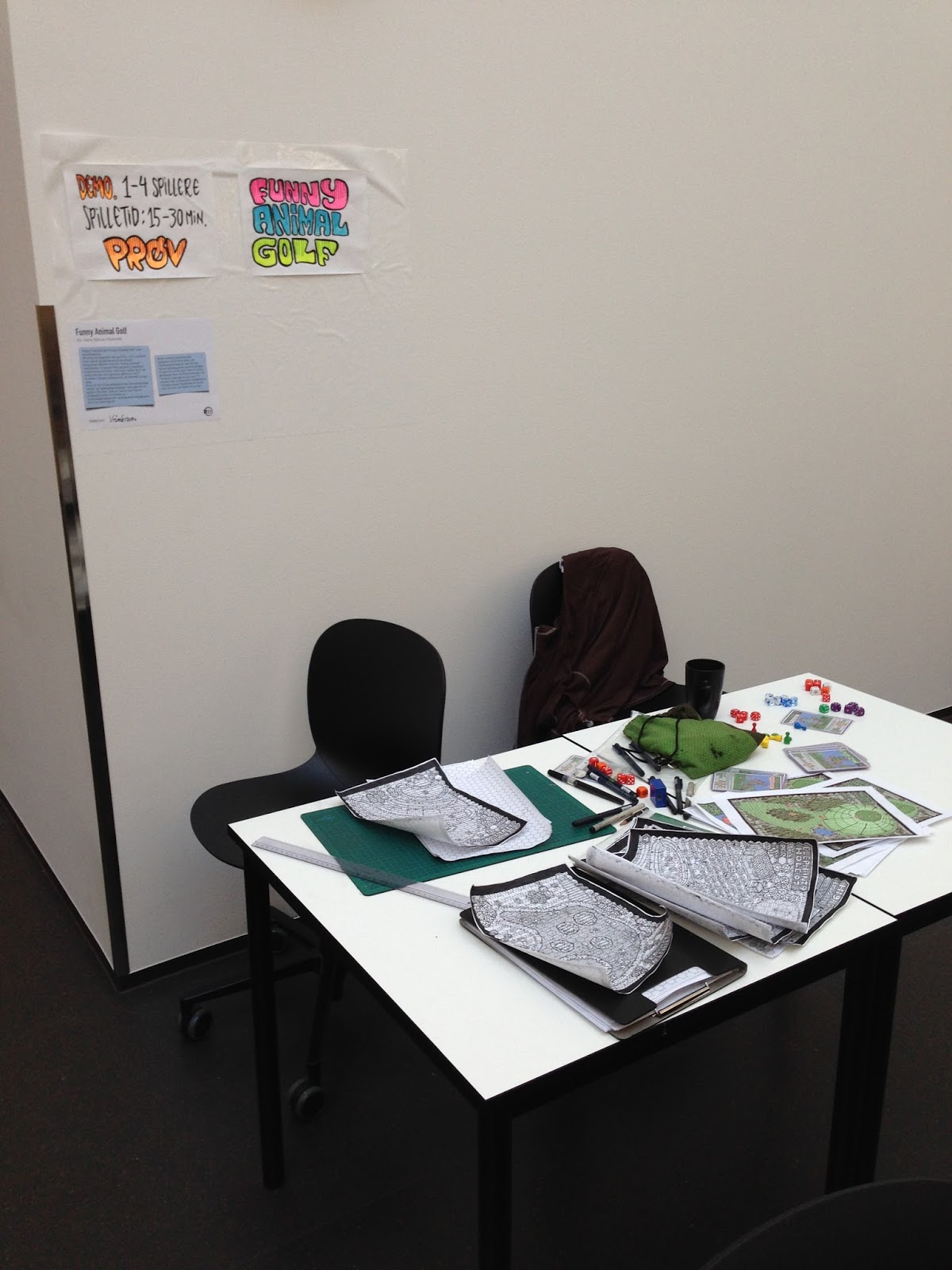 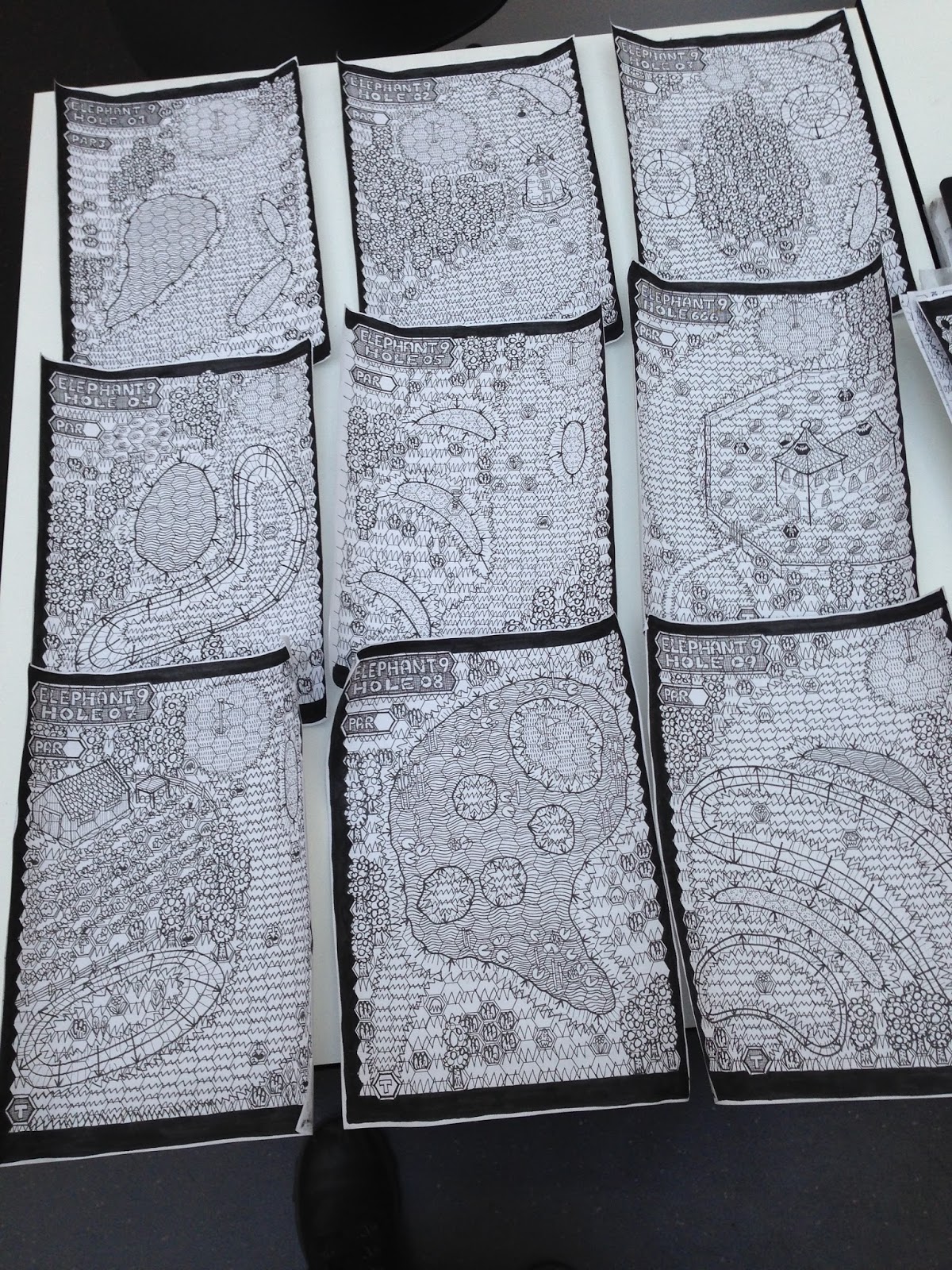 When returning to Oslo after the weekend in Bergen used the next few evenings to plan my next batch of maps and write down the core mechanics of the «racing game». Right now I have a lot of fun working on this silly little project, and at todays time frame I will give it a couple of more months of attention before diving back into my neverending «world building / game project». 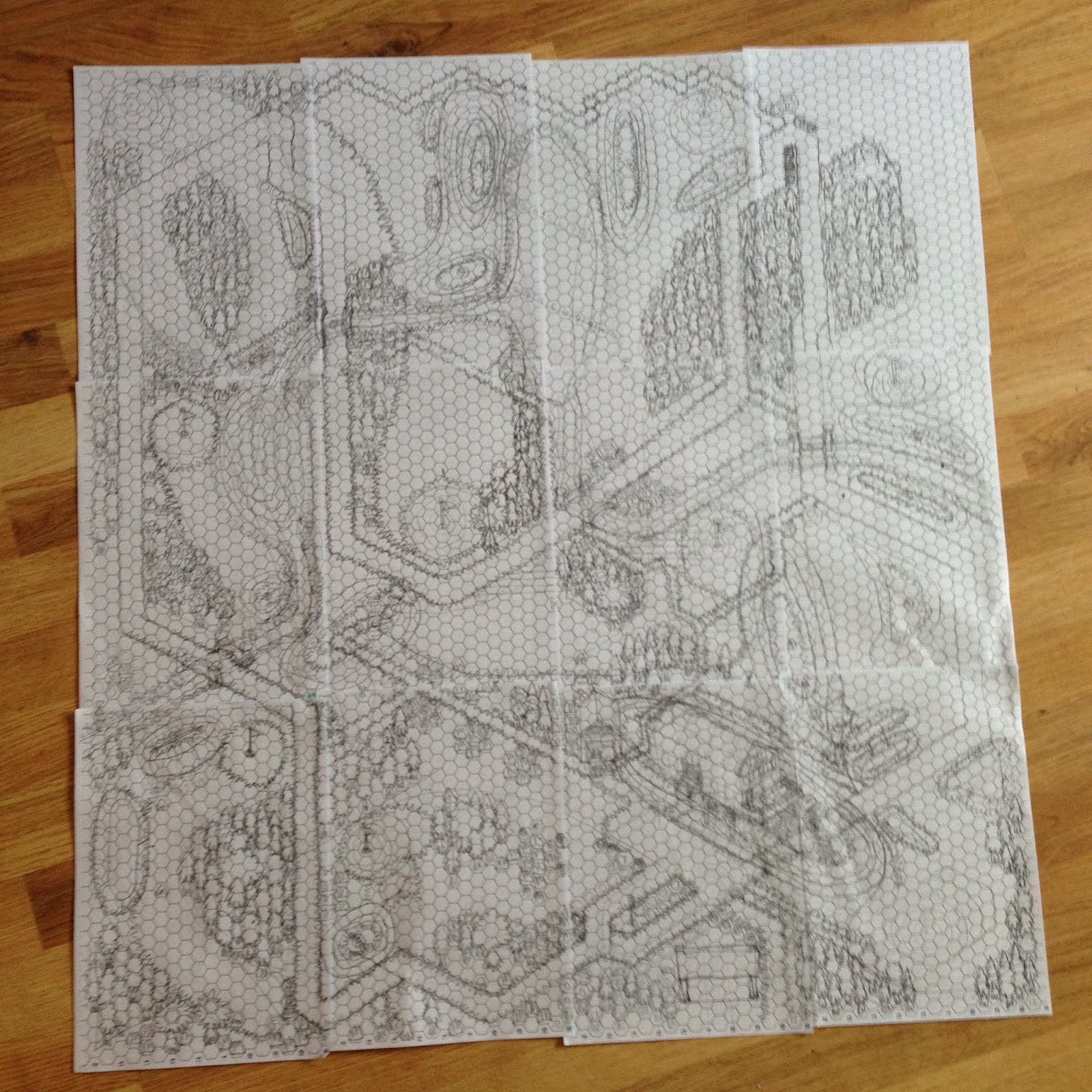 You can check out the rules and illustrations for «Funny Animal Golf Open Alpha» here: